The limits of national income as a measure of human wellbeing have been well understood for some time now. However, it seems that finally economists [1, 2, 3] and scholars from a range of disciplines including public health [4], psychology [5], social statistics [6] and philosophy [7] are increasingly engaging with governments and international organisations to consider how best progress might be monitored in terms of its outcomes for human wellbeing.

These developments owe much to the work of Nobel Laureate Amartya Sen, whose theoretical blueprint for moving ‘beyond GDP’ has inspired researchers and governments alike to reconsider how progress should be conceptualised and measured. Based on three simple equations, his approach highlights the following structural facts about human wellbeing [8]. What a person does and is depends both on the resources to which they have access, as well as their own abilities that help them to convert these resources into valuable outcomes. Secondly, it is possible to think of a person’s experiences of happiness, fulfilment and so on, as depending mainly on the things they do or are. And thirdly, the opportunities that a person has, based on his/her resources, entitlements, and abilities are also of importance in assessing wellbeing.

So much for theory —but what do we now know about measurement wellbeing in practice? For one thing, evidence indicates that wellbeing is highly multi-dimensional. For adults, there are many different kinds of things that make life go well or can cause difficulties for people. How these different aspects or dimensions are described or grouped varies significantly between accounts though there are some common themes and distinctions that have emerged. Some of these issues are relatively concrete (e.g. home, work, community, physical environment) whilst others are arguably more abstract (e.g. autonomy, freedom of expression, social inclusion and trust). Furthermore, policy-analysts are increasingly developing and using multi-dimensional measures of wellbeing to monitor and understand the impacts of growth on human wellbeing [9].

Such data illustrates, for example, that there is great variation between people in terms of people’s abilities associated with home-related factors and access to services —and this may be true in general for high-income countries (see figure). Work places tend to be regulated and communities are shared spaces so it is perhaps not surprising there is greater variation in factors related to home, which is a more private space. 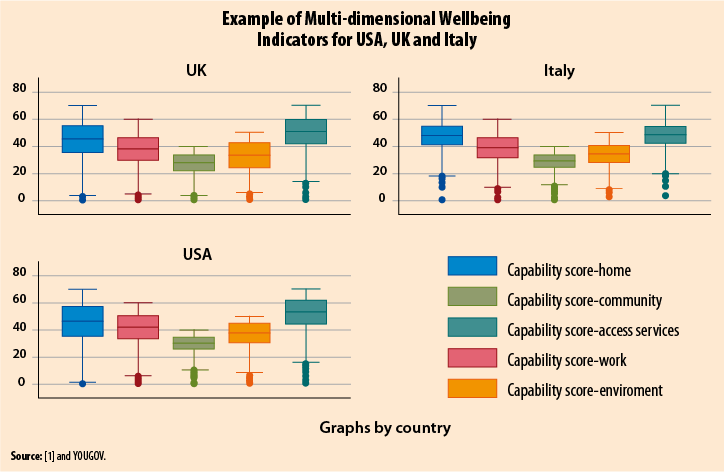 A second issue concerns debate around the validity of subjective indicators. There is a growing acceptance, that as part of a portfolio of indicators of human wellbeing, some subjective indicators should be present. Answers to questions about life satisfaction, once the preserve of psychologists are now widely used, for example, as a variable in economic analysis. In addition, there is also a recognition that even these experiences cannot always be usefully boiled down to a single variable —the things that make us happy are not necessarily the opposites of those that make us anxious, for instance. These subjective indicators have their problems —adapting to difficult cir-cumstances makes subjective measures difficult to use as benchmarks. Besides, there is an asymmetry between high and low scores: expressions of unhappiness about an issue generally do indicate that it requires further attention.

Perhaps the third and most difficult theme is the measurement of concepts such as opportunities or capabilities themselves. Initially, researchers felt that a person’s opportunities were well nigh impossible to describe in full, but subsequent research has shown that both direct and indirect measures are possible [1, 10]. The (low) proportion of women on company boards or in government helps to make the point: evidence of unequal opportunities can be found if one is interested in looking.

These developments give rise to further questions about both science and impact, questions that can be closely related in this context. From an impact perspective, it is worth noting that Sen’s framework has already inspired the UN to develop its Human Development Index (HDI), the OECD’s Better Life Index [11] and a substantial report commissioned by the President of France [12]. The HDI was developed initially as an equally weighted average based on income, life expectancy and literacy; and has been influential in development circles as a numerical input into policy debate. However, it does not easily discriminate between higher-inSource come countries whose scores are close to the maximum. And for developing countries, other priorities to do with extreme poverty and gender inequality have had to be added to the suite of measures that the UNDP publishes.

One recent report, from a country relatively high up the ladder of wellbeing, argues that comparing country rankings is less interesting than, say, finding out what countries that do well have in common. Based on a range of sources including population surveys, it concludes that key elements are interpersonal trust, effective social security, wealth, freedom, decent job design and work life balance, and an effective civil and democratic society [13]. The fact that these ideas have moved from the realms of research into practice indicates the practical value and potential political support for such work. But there are still a number of issues that call for further consideration.

Money is important but it clearly isn’t everything and such lists emphasise the importance of a range of social-institutional factors. The concept of social capital, as a result, developed some time ago in sociology and economics, would seem to be rather important. Therefore, as the OECD has recently pointed out [14], there is considerable work to be done before we can claim to have a decent measure of it.

Additionally, there has been much debate about whether focus should be given to a dashboard of indicators or an index [15]. Indices are often easy to construct but in this context can be difficult to justify. If activities, and experiences and opportunities and their distribution matter to us, how could we find a set of weights that would allow us to calculate in a single number, a country’s wellbeing? And should be done about children and senior citizens? In reality, most practical value seems to lie in understanding the key drivers of different aspects of wellbeing.

That said, this seems to be an area where progress is being made by those willing to try things out, acknowledge the difficulties and search for improvements rather than waiting for a gold standard alternative to GDP. Developing these new measures helps us both monitor the things that matter in life but also think through what our priorities really are.

Is Professor of Economics Decision Sciences and Philosophy at the Open University, and Research Associate in Health Economics at Oxford University. He holds a doctorate from Oxford University in the area of economics and philosophy. He currently teaches economics, and conducts a research on the measurement and analysis of life quality using a Sen-Nussbaum capability approach. In the past he has taught and researched at Oxford, York and Cambridge Universities, and has acted as a consultant for the OECD and UK’s National Health Service. He also has made significant contributions to the foundations of utility theory (Rational Choice Under Risk) published by Oxford University Press and over the past 15 years has been director of the capability measurement project which was one of the first to develop direct measures of human capabilities which can be used to broaden considerably the Human Development Index. He is currently completing a short popular book entitled ‘Happiness Explained’, is the Trustee of a UK charity that supports research dissemination and use. He lives in Oxford with his partner and two children.