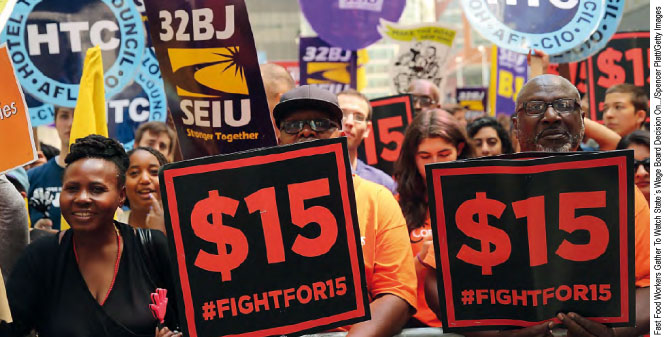 United States Manufacturing Sector has witnessed a fall in employment over the last decades. However, the output level and the (average) wage-rate have increased in this sector. Figure 1 shows the evolution of employment and output levels for the 1950–2010 period. 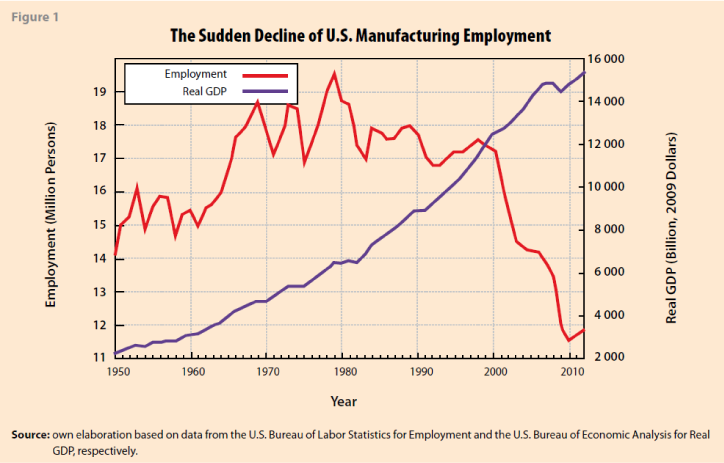 Several studies link this phenomenon with an increasing participation of imports coming from South-East Asia, China, Mexico, and other developing countries. Similarly, outsourcing and off-shoring activities carried out by U.S. firms are sometimes identified as “unavoidable facts due to Globalization”. In addition, technological improvements and the ubiquitous aggregate consumption shift are pointed out to play a very important role by giving more participation to service industries at the expense of lower employment levels in manufacturing industries.

Another front in the debate is the evolution of (total factor) productivity in manufacturing. Some economists argue that U.S. Economy has experienced a sharp increase in productivity. Among this group of researchers, Spence and Hlatshwayo (2012) suggest that the value added per job in tradables has risen by more than 40% between 1990 and 2008. In contrast, overall productivity (including both tradables and non-tradables) increased only 20% during that period. Their evidence goes in line with the classical statement about the existence of a strong relationship between tradables and productivity evolution. The almost canonical explanation is that tradables are more heavily exposed to competition than non-tradables. As a result, the policy implication derived from classic models is that open economies grow faster than closed ones.

On the other hand, some studies consider that labor productivity has been overestimated as a consequence of a miscomputation of temporary labor, which was not included as part of the corresponding sector’s total employment (see for example Susan Houseman et al. [2011]). Similarly, Luria and Rogers (2007) cast doubts on labor productivity increments that were reported in some recent estimations. They suggest a lower manufacturing productivity growth would be found if some industries like computing and high technology were excluded. Those sectors have had the greatest imputation but the least direct output measurement.

Some celebrated studies (see for example Bernard et al. [2006]); Harrison and McMillan (2011); and Author et al. [2013]) found some evidence that the import penetration and import competition deteriorate U.S. manufacturing employment. In this paper, I use more recent data and explore empirically different channels not contemplated by those previous studies, which could help to explain a negative (or positive) relationship between employment and trade in the 1998–2008 period. I build on a model that takes into account different responses coming up from different manufacturing sectors. The model goes in line with Greenaway, Hine, and Wright (1999) and Fu and Balasubramanyam (2005). It is important to distinguish which industries are more affected by the presence of foreign competitors. Moreover, it would be desirable to quantify the corresponding impact on employment. Different reactions to imports and exports need to be fully understood if policymakers seek to encourage (discourage) strategic industries.

The organization of the paper is as follows: in section 2 the model is presented and the estimating equation is derived. Section 3 describes the dataset used later to quantify the impact of trade on manufacturing employment. Section 4 explains the estimation method and the main assumptions made in the empirical model. It also presents the estimation results. Finally, section 5 concludes this article.

Based on Greenaway, Hine, and Wright (1999) and Fu and Balasubramanyam (2005), we assume a standard Cobb-Douglas production function2 for the representative firm in industry i in a given year t

In the above expression, Q is real output, K is capital stock, and L represents the units of work used. Variable A accounts for the total factor productivity, whereas the coefficient Y allows for improvements in firm i´s efficiency. The parameters ɑ and β represent the shares of capital and labor in industry output, respectively. Assuming profit maximization, from the first order conditions we get

where w and r are the wage rate and the capital cost, respectively. One could normally expect that the average efficiency level of a given production process evolves over time. We hypothesize that variable A varies with time (T), export penetration (X), and import penetration (M) as follows

The variable Ti is a time trend. The parameter δ0 is assumed to be positive but no restrictions are imposed to δ1 and δ2 (i.e. they could be positive or negative). Normalizing the returns to capital, assuming perfect competition, applying logarithms, and substituting (3) into (2), we finally obtain the following linear equation

With the aid of expression (4) we are able to investigate the relationship between trade and employment.

We use the OECD-STAN dataset for U.S. industry-specific data. The sample period runs from 1998 to 2008. Table 2 lists the manufacturing industries used in this study, which approximately correspond to a four-digit ISIC level of aggregation. In Table 1, the total output rose 11.2% during the period analyzed. Among the 27 industries considered here, only 13 increased their output (9 out of 17 Low-tech industries, 2 out of 4 Medium-tech industries, and only 2 out of 6 High-tech industries). There was a widespread fall in employment, totalizing a 23% fall in the manufacturing sector jointly considered. Only two marginal sectors (Pharmaceuticals and Shipbuilding) were able to increase the quantity of labor used. However, wage evolution was favorable during the period. There was a 9.5% increment in the average wage rate paid 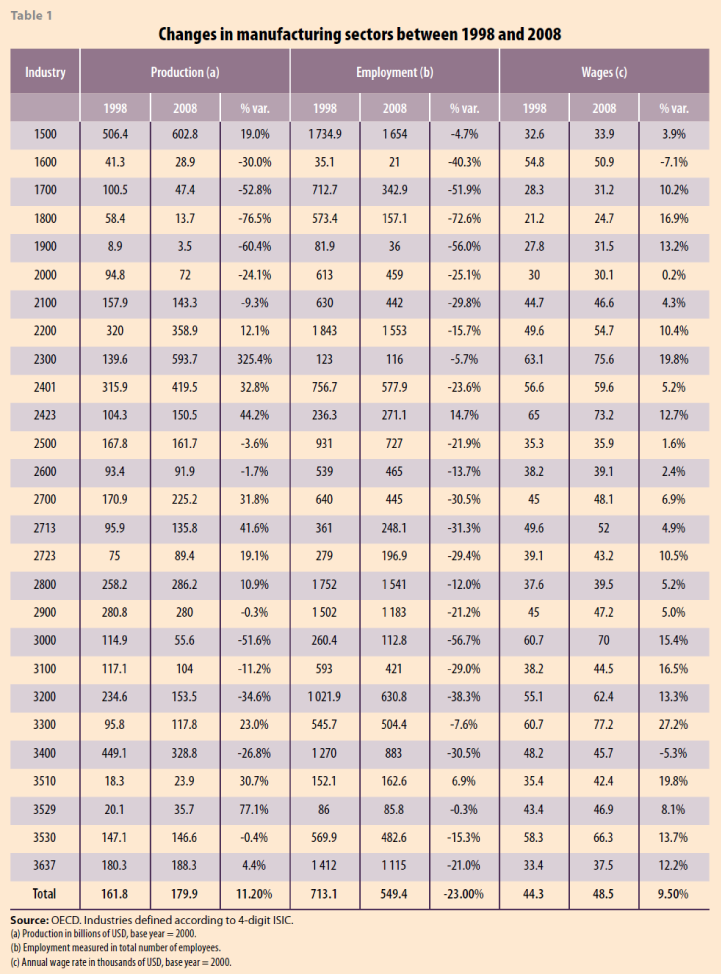 Table 3 presents a brief description of trade patterns during the period of analysis. Only seven sectors have remained with a positive net-export sign (i.e. a trade surplus): tobacco; printing and publishing; chemicals excluding pharmaceuticals; machinery and equipment not included in other sectors; medical, precision and optical instruments; shipbuilding; aircraft and spacecraft. 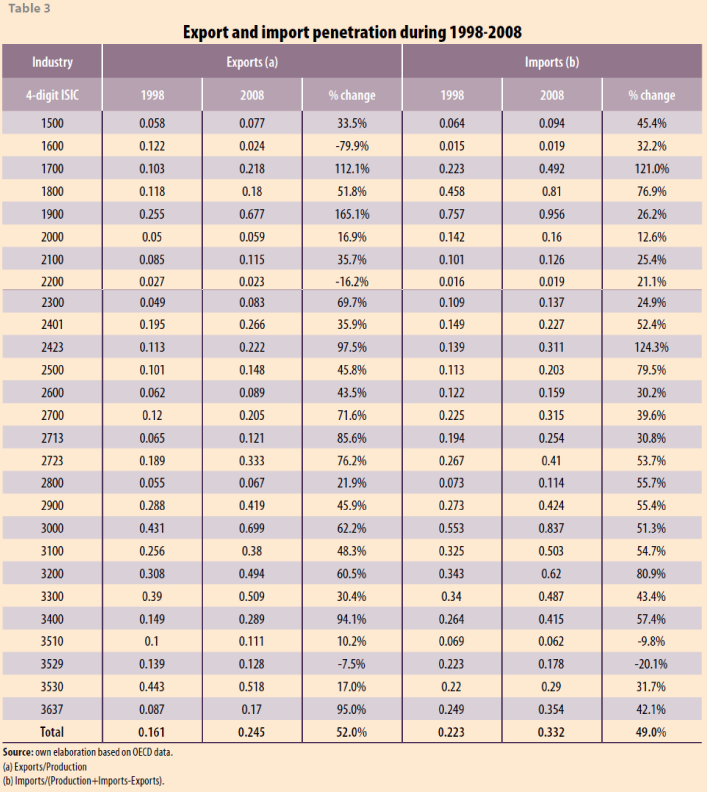 It is natural to allow for lags on employment. First, any exogenous shock to employment entails an adjustment cost which may cause a deviation of employment from its steady state path. This fact favors the introduction of lags on employment into our equation (4). The necessary number of lags in order to cope with adjustment costs depends on the heterogeneity observed in the different industries and markets. Hence, if all the industries have a homogeneous adjustment process to a given shock in the labor market and also react swiftly and smoothly, then one lag is enough. Otherwise, the econometrician needs to provide the model with more than one lag.3

Other potential sources of heterogeneity appear when technology shocks are serially correlated or when workers negotiation power is strong enough to prompt longer bargaining periods (which extend beyond one calendar year). Finally, with the purpose of avoiding a judgment of causality between employment and the set of explanatory variables used here, we introduce a distributed lag structure for all the independent variables considered in the empirical model.

We also assume that the independent variables have common impacts across industries. Thus, differencing expression (4) we are able to eliminate the industry fixed effects, and the general dynamic equation to be estimated becomes:

As it was stated above, the explanatory variables are assumed to be endogenous and causality runs in both directions, so the regressors may be correlated with the error term. To avoid bias in the coefficients of the lagged dependent variable, we adopt a GMM approach using the Arellano and Bond (1991) method. Provided the differenced equation is free of second and higher order serial correlation, this technique proportions unbiased and consistent estimates of the desired parameters. To justify our empirical strategy, we present the Arellano and Bond test statistics to monitor the potential serial correlation. Additionally, we validate our instruments using the traditional Sargan’s test, which allows us to check for over-identifying restrictions in the regression model.4

Table 4 presents the estimates of the coefficients for three different specifications. 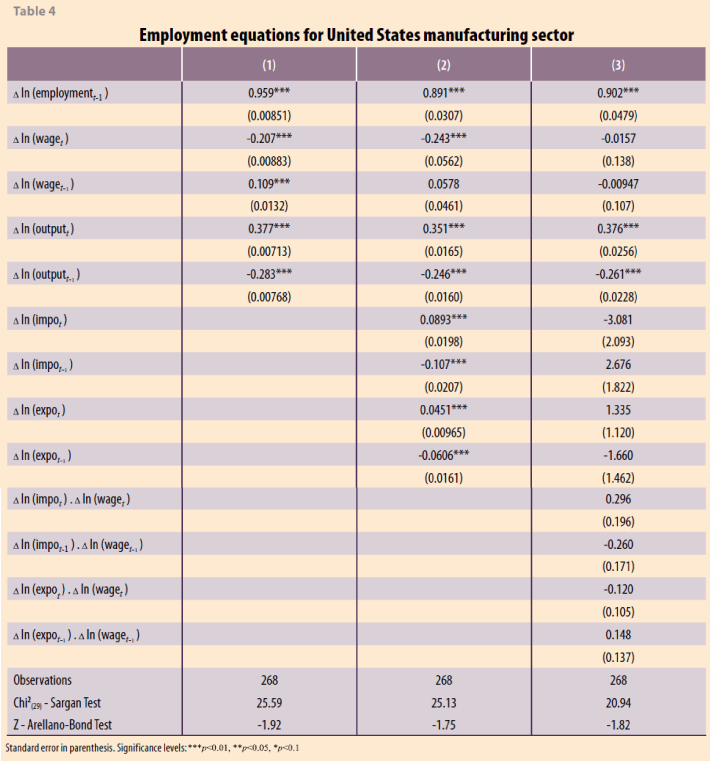 Column (1) reports the base specification. As expected, output causes increases in the level of derived labor demand, whereas wages have a negative effect. The lag employment coefficient is positive, which indicates persistence in wage and output effects on the level of employment. Column (2) incorporates import and export penetration to the basic employment equation. Coefficients associated with wages and output remain unchanged and of similar magnitudes. With regards to trade shares, both export and import have a slightly positive effect in time t. However, the impacts are mitigated since the corresponding lag variables have opposite signs of relatively similar magnitudes. Finally, Column (3) explores the impact of trade changes on the slope of the derived labor demand function. In this specification, we evaluate the possibility that increased openness could make it easier to substitute foreign workers for domestic workers and thus, trade variables are interacted with wages. There is no clear effect on the wage elasticity and the corresponding variables are not statistically significant at conventional levels.

After a period of lower exposure to trade during the 1930s and 1940s, the post-war period resulted in a growth of world integration. Trade was the star variable in most industrialized countries and led the economic growth. Even a large economy like United States’ that has traditionally had a small share of trade in its GDP was part of the globalization process. And more recently, the impact of expanding trade on labor markets and the corresponding adjustments throughout the economy have generated a renewed interest of many analysts. One of the main concerns emerged from the effect that the rapid expansion of low-wage economies (especially in East Asia) caused on manufacturing jobs. However, a detailed quantification of this decline in employment during the last decades still needs to be studied in depth. Our paper contributes with a simple empirical model that helps to understand the relationship between trade and labor markets at the industry level.

Using a sample of 27 manufacturing industries for the period 1998-2008, we investigate the impact of trade on employment. When trade is introduced in the estimating equation, we find that increases in export and import penetration generate slight increases in the level of labor demand. However, these effects are balanced out in the long run. This evidence seems to be (partially) at odds with the view that increased openness serves to increase the efficiency with which labor is used in the firm and then reduce employment. Instead, it tends to support the idea expressed in Rodrik (1997) that substitution of foreign workers for domestic workers increases the wage elasticity of labor demand.

Further research should focus on the analysis of a richer disaggregation of import and export data in order to see whether the country of origin (of destination) affects labor demand differentially. Additionally, an analysis based on the skill gap literature that incorporates some disaggregation into different categories of labor might be useful to better understand the phenomena observed in U.S. manufacturing sector during the last decades.

1 I would like to thank seminar participants at the University of Wisconsin-Madison and CIDE for very helpful comments. All remaining errors are my own.
2 The Cobb Douglas production function has an intrinsic limitation, namely, elasticity of substitution is equal to one for all industries. The difficulty of relaxing this assumption relies on the impossibility to properly identify wages when using a general Constant Elasticity of Substitution function (CES). The use of other unconventional functional forms is not evaluated in this study.
3 For a discussion on this topic see Nickell (1986).
4 The Sargan test is based on the observation that the residuals should be uncorrelated with the set of exogenous variables when the instruments are truly exogenous.